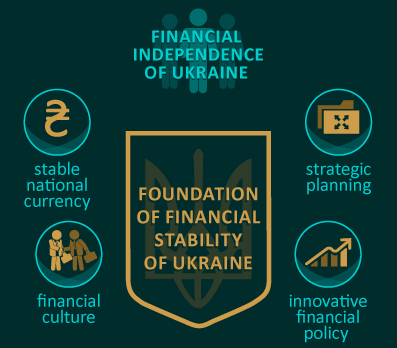 Appeal by the Chairman of Non-Government Organization "Financial Stability"

Today we received a historic opportunity to changes that was very expensive for Ukrainian people and which we cannot miss. Only now we see the depth, extension of the many problems that have accumulated over the years. But most importantly that the changes began, though not as fast as we would like, but what is the most importantly we shall not stop and just boost momentum.
My goal is to build a reliable, strong financial system of Ukraine, which will be based on clear, transparent mechanisms that will provide the stability of the national currency.

Since  1991 – the time of declaration of independence of  Ukraine, each single government pursued the policy of active attraction of external loans to cover the deficiency of the state budget. Regardless certain attempts to modernize debt policy of Ukraine and adjust the amount of the state debt, the sums of external borrowings grow year to year.

On the one side, the consequence of accelerated globalization processes and integration of global financial markets is easier access to favourable conditions of international crediting and cheap foreign monetary resources, but on the other side, absence of the efficient state mechanism of external debt management results in decrease of resistance of the Ukrainian economy and weakening of its debt sustainability because of excess external borrowings.

In the conditions of  non-developed  strategy of the efficient management of the state debt, the financial crisis of 2008-2009 and destabilization in the world credit markets  complicated already difficult situation with the state debt of  Ukraine as the  sudden devaluation of the national currency vs. foreign currencies, in which state loans were previously obtained, deepened the problem of management of debt liabilities in both short-term and long-term prospective  increasing the external debt burden on the State budget of  Ukraine.

An additional factor of   financial instability of Ukraine, which effect is still evident, consists in events of the beginning of  2014, when implementation of the geopolitical  strategy of the  Russian Federation  in respect to former USSR countries, which involves formation of a neo-imperialist geopolitical area, resulted in annexation of the  AR Crimea and military actions in the East  Ukraine.

Thus, Ukraine integrated into the modern globalized world, desperately trying to overcome consequences of the impact of the world financial crisis on own economy and financial system and minimize the damage from destroyed economic links with Russia, which were too strong and interconnected before,   needs development of new conceptual  basis for the  debt strategy and implementation of modern efficient mechanisms of the external state debt management.

This problem is especially critical because now there is very complicated situation in Ukraine when non-reformed, overregulated, heavy system of governance is combined with external aggression and internal conflicts, makes it impossible to respond timely to today’s challenges in the debt policy area. And most importantly, this situation is unprecedented and thus there is no global experience, which might be applied by Ukraine as a standard model.